Before the frost is a great time to take to the woods and fields with camera and field guides. In my twenties I wandered into Washington University’s bookstore, buying the biggest nature book I could find. Julian Steyermark’s Flora of Missouri, became my new Bible and I have been enamored with identifying plants ever since.This summer I set out to learn about ferns. Here are some of the easier ones to identify: 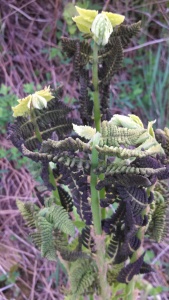 One early fern of the Northeast that persists into the fall is the Interrupted Fern (Osmunda claytoniana), a large once-pinnate-pinnatifid fern (meaning it has leaflets, but not ferny, lacy sub-leaflets). The fronds emerge early, and being appropriately named, the taller, more erect fertile fronds are interrupted by what looks like frost damage—a brownish gap along the blade, the fertile pinnae. If you look closely at the interruption, you can see the sporangia. 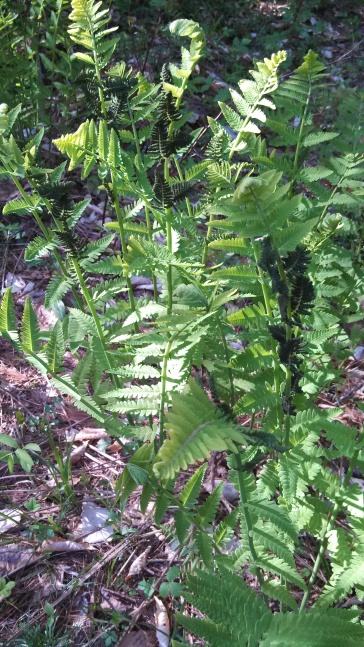 Lady Fern (Athyrium filix-femin) is another common woodland fern. A medium to tall, lacy (twice-pinnate) fern with clumped roots. A quick look at her stipe will reveal her “hairy legs”. On the back of fertile fronds are reproductive dots called sori; Lady Fern sori are  eyelash or tear drop-shaped. This species was once used as a potion to rid the digestive system of worms. (Chadde, Steve. Northeast Ferns) 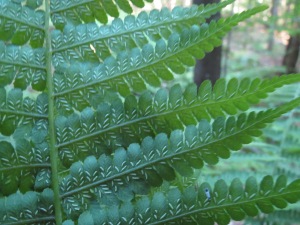 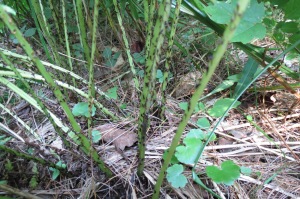 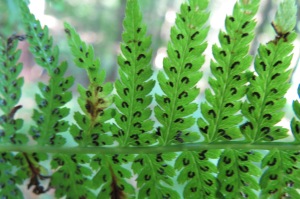 Some ferns have fertile fronds that are indistinguishable from the non-fertile fronds except for their backsides. By turning over fronds (only some fronds will be fertile) look for sori on the back and how they are arranged; this will help you identify which fern you are looking at, for each species has a distinctive pattern.

Others species send up separate fertile fronds (sporophores) that do not look at all like a fern frond, but might resemble brown beads. Sensitive Fern is one of these. The bead-like fronds persist long after the rest of the plant has died back. (Onoclea sensibilis) is very common in our Vermont woods and is easy to identify, as it is large and, what is called coarsely cut, meaning the wide fronds are only once cut. No fancy ferny leaves here, they are so coarsely cut, the frond sometimes covers the rachis (stem). 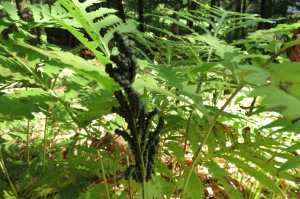 The (Ostrich Fern (Matteuccia struthiopteris), also in the Sensitive Fern family, is tall, grows along riverbanks, has edible croziers called fiddleheads, and, if in doubt, pull up a green frond and see if it has a brown spear-looking base, where it separated from the rootstock. 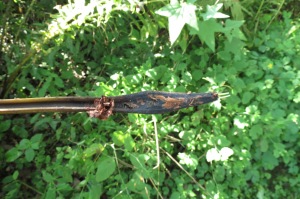 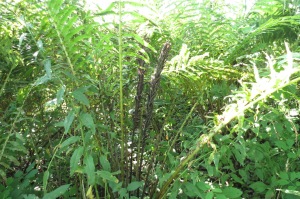 The Christmas Fern (Polysticum acrostichoides) is so named because it remains green through the winter and was used for holiday greenery in the house. Look closely at the fronds and you will see little Christmas stocking shaped pinna (leafs). The sori are found on the tips of some fronds, and completely cover them  with brown. 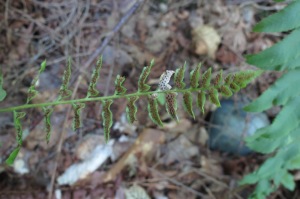 There are many more ferns that are simple to identify like Northern Maidenhair, Royal Fern, Rock Polypody, Crested Wood Fern, Beech Ferns, Marginal Wood Fern, Bracken Fern and the little Oak Ferns. I’ll write about them soon. In the meantime, try to get out in the woods before the frost turns many of them brown. I recommend Steve W. Chadde’s book Northeast Ferns that came out in 2013.

All photographs used in this blogpost are by Micki Colbeck and may be used with permission.