A Solitary Walker for the Valley News 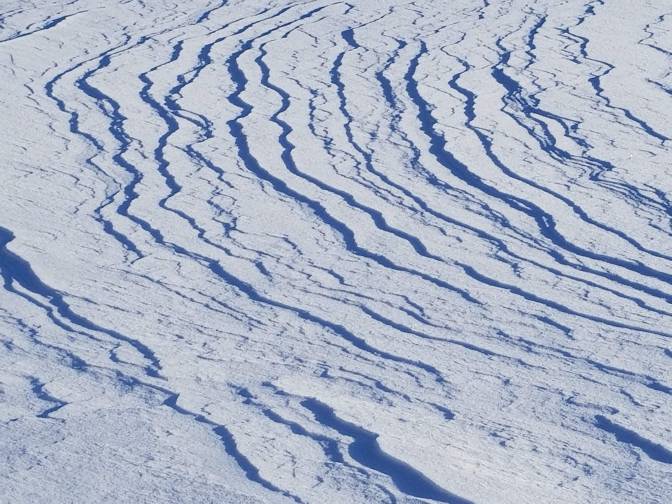 Have you ever had a moment when something you had always thought to be true becomes untrue? Not that this something has undergone a physical change, like when mud is compacted into slate, or when the Earth’s magnetic north takes off at high speed toward Siberia, but rather when your understanding of this something has suddenly changed?

I recently experienced one of those moments while skiing in the fields with my two little brown dogs. Physical activity in the cold opens the mind to questioning, creativity and downright love of being alive. This sunny morning followed a period of snowstorms and heavy winds. As I skied, watching the ripple patterns in the snow, I asked myself, why does it always seem that ridges and slopes in snow are going the wrong way, with the gentle slope downwind and the rough, steep ridge upwind?

I have noticed this before while skiing and explained it away by convincing myself that the winds must have been reversed when the ripples were formed — altering reality to explain the evidence. This time I decided to do some research. It turns out that the physics of sand and snow are very different.

Sand ripples and dunes are formed when the wind picks up and deposits grains of sand along the surface. The grains are deposited up the gentle stoss (or windward) slope until they reach a point where the height of the crest offers too much resistance. The sand grains then drop and fall down the steep lee backside.

New, soft snow will act like sand too, forming dunes and ripples, if the wind is just right — around 15 meters per second. Any faster and you get a flat surface. However, snow is water and sand is mostly quartz. After a day, snow crystals will meld together, a process called sintering. Crusty snow no longer acts like sand, and the wind then becomes an agent of erosion, carving away the face of each ripple.

“Sastrugi” is the general name for these erosional features that have gentle downwind slopes and steep wind-facing slopes. The smaller forms that we see here in New England are called wind ripples or wind ridges. One would need to travel nearer the poles to see the large, anvil-shaped sastrugi that have eroded away from the bottom to curl into themselves.

The lesson for me was to trust my senses. Empirical data teaches us about the world we live in. Before the age of immediate information, we needed to have our eyes wide open to survive. Do I go outside and feel the air on my face in the morning to tell the temperature, or do I look at the weather app? I do both. And the research I used while studying snow bedforms all came from papers I accessed on the internet.

Immediate information can be a blessing, but don’t stop using and trusting your senses. Look at it, taste it, smell it. If it doesn’t seem right, don’t trust it. In the words of Bob Dylan, you don’t need a weatherman to tell which way the wind blows.

Micki Colbeck, of Strafford, is an artist, a conservation biologist and a member of the Strafford Conservation Commission. She is a frequent contributor to the Sunday Perspectives at the Valley News, Lebanon, New Hampshire, as A Solitary Walker.